Songs serve important functions in many species, and at least one function for zebra finches is the means for the male to attract a female.

Male zebra finches learn their song from a tutor, who is typically the father.  The process of learning a song is analogous to language learning, where both the strong motivation to mimic, learn and practice produces greater fluency and precision.  When juvenile birds reach adulthood, the song they sing appears crystalized, remaining the same for the remainder of their adult lives.  Curiously, during their adulthood, there is ongoing neurogenesis in an area of the brain, HVC, that is instrumental in the production of this song.  Despite the fact that adult neurogenesis has been well-documented in this area for decades, it is not well known how nor to what extent these new neurons may benefit song production in the adult.

What is known is that 50% of the adult-born neurons (ABNs) in HVC send their axons to a motor area (RA), which then projects to the motor nuclei conducting the muscles responsible for producing song.  It is currently unknown how these adult-born HVC-RA neurons develop and become incorporated into the existing HVC circuit, and Jake Aronowitz has been using injections of retrovirus to label ABNs and thus identify and record the HVC-RA for better understanding of that process.

The identity of the remaining 50% of ABNs in HVC that do not project to area RA is not known.  Jake has been leading a project with a team of undergraduates (see below) that strongly suggests the mysterious 50% of HVC ABNs are readily labelled by DARPP-32, a phosphoprotein that is found in neurons with dopamine receptors.  What is very clear in these studies is that the HVC-RA neurons do NOT have DARPP-32.  Thus, we believe that there are two distinct and identifiable populations of ABNs in HVC.  Current and future studies are focused on the DARPP-32+ ABNs in area HVC so that we can better understand their connections with other neurons and role(s) in song production.

Epilepsy, the hippocampus, and the cortex

Synchronous activity and high rates of activity in the mammalian brain are normal and necessary.  Information from the cortex, the “conscious” anatomical level of the brain, is funneled through the hippocampus and other temporal lobe structures required for the formation of memories.  Areas of cortex representing different modalities, such as visual processing and auditory processing, can communicate with each other synchronously across relatively great distances, binding these different modalities into perceptions.  It seems that without the ability to synchronize cortical activity and form long-term associations between different cortical activities, we lose the abilities to form coherent perceptions and useful memories, respectively.

Unfortunately, the underlying architecture of this fantastic network provides a generous substrate for pathological seizures.  Seizures have been compared to explosions or fires in the brain, and the symptoms of a seizure can range from merely the experience of an odd taste in the mouth to uncontrollable convulsions.  Relatively small disruptions of the healthy synaptic architecture of the brain can lead to an epileptic disease state.  Approximately 1% of the human population has some personal experience with epilepsy.

Our lab is examining the dynamics of seizures that are functionally connected by the corpus callosum, the main white matter tract connecting the two cerebral cortices of the brain.  Recently, we have compared epileptic versus non-epileptic mice with regard to induced seizures that propagate across the callosum, and we have a manuscript in progress.

Current research in this area is on hold, but we plan to resume in the near future. 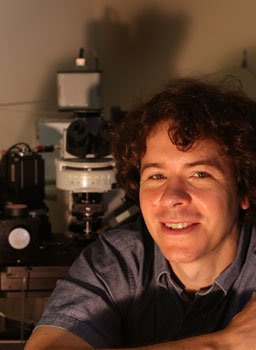